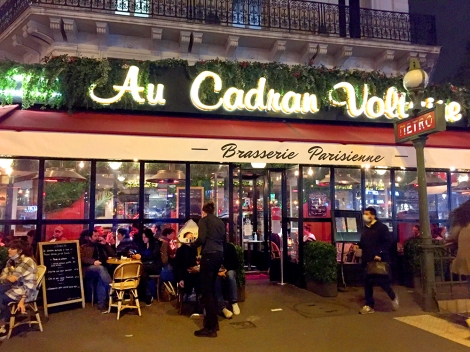 Last hurrah at a local café. Last night was balmy and everyone was en terrasse. Today, silence. This second lockdown will be hardest on local businesses. ©Lisa Anselmo

Here we are again, my friends. Lockdown #2. Color me bewildered.

“No country could have predicted how accelerated, sudden, and brutal this second wave would be,” French PM Jean Castex said in his address to the Assemblée Nationale, October 29th.

This statement was met with audible grumbling and visible head-shaking among the incredulous assembly members. He really didn’t see this coming?

I’m no world leader, no doctor, nor scientist, but I have eyes and live in the real world. And I can tell you this: I could have predicted this exact outcome. What precious planet do these little prince politicians live on?

Castex, appointed after Edouard Philippe resigned, was in charge of the plan to phase out confinement this spring. Well, “phase out” is not really accurate; it was more of a Revert to Normal Toute de Suite Plan. Social distancing was no longer actively enforced, stores and restaurants began to slacken precautions, borders opened to EU countries with out-of-control cases (like Spain), and large gatherings were tolerated around town.

Paris Mayor Hidalgo, who herself tested positive without symptoms, allowed the annual June music festival to carry on, as well as the summer péniches (open-air bars on the banks of the Seine)—both of which drew large groups of young, maskless partiers. Is it a coincidence that this was in the weeks preceding the mayoral elections? She won by a large margin.

Late July in the 17th arrondissement. At least 200 people gathered on this plaza with two café terraces of too-tight tables. The voices drowned out the traffic. How could anyone not see the warning signs? ©Lisa Anselmo

By the time the August vacations had come to a close, daily cases had grown ten-fold (7000+ vs. 700+ in June). Masks became mandatory, but little else was done to remind people of, and reinforce, the social distancing plans still technically in place. Bars stayed open. House parties blazed on. We thought, when October rolled around and daily cases jumped almost 200%, we’d hear an official announcement, see more enforcement. Instead, tables moved closer on terraces, Parisians blithely kissed each other hello, crowds gathered inside galleries. No one seemed alarmed.

Business as usual at this café last week. The curfew had been announced and the “rule of 6” reinforced on terraces. But not so much here. At least people on the street are wearing masks. ©Lisa Anselmo

As of a few days ago, according to Worldometers, France hit nearly 60,000 new daily cases, growing around 5000 a day, for a grand total of 1,282,769—the largest in Europe. Maybe Monsieur Castex was caught by surprise, but we everyday folks who saw what was happening in Paris this summer, just shrugged. I hate to say, “I told ya so.”

Now we’re paying for what seems like denial at best, negligence at worst. And, yes, the people are also culpable. I’ve learned that the French need constant reminding. Distance is not something they do easily, nor is complying with safety measures, so it seems. “We are so selfish,” my Parisian friend, Edith, complained during one of our last café outings a few days ago. If we’d stayed proactive, continually enforced social distancing measures after lockdown ended, deterred large gatherings in venues where people are not wearing masks, might things be different today? 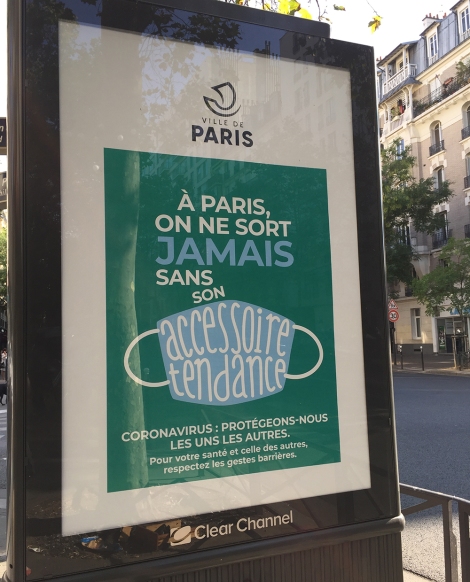 “In Paris, we never go out without our trendy accessory.” Mask PSA seen around town. Seems Parisians need to be charmed into wearing masks. It works; most everyone wears one—without complaint. ©Lisa Anselmo

So yes, I am bewildered. The worst part: small business, like cafés and local specialty shops, will once again pay the highest price. These businesses sacrificed this past spring so we could gain ground against the disease, only to have that victory tossed away by absentee leadership post-lockdown, when we needed guidance most. When will they understand that we’re playing the long game here?

Confined again, naturally. The mood is not like before, of course. People are angrier. And sadder. And not quite as obedient (if the gathering of young men currently chatting below my window is any indication). That’s another problem of letting down our guard. We have to relearn how to be confined. (Continued below…)

A final (and memorable) dinner on the quay of the Seine with buddy Craig Carlson (author Let Them Eat Pancakes)—a gift we gave ourselves. We thought cold weather would close this terrace, but Covid got there first.

I won’t be seeing this view for a while. My confinement zone doesn’t reach the Seine. Unless I have an approved reason to be in the area. ©Lisa Anselmo

This reconfinement as they call it, is not quite as strict as it was before; we’ve learned from the last time. More types of stores will stay open, municipal offices, construction and factories will keep going, schools also will stay open. But we’ll need paperwork to move about again, and this time, fines are steeper, with the third infraction landing you in jail for 6 months. They are not messing around.

How long this will last is unsure, but word is at least til mid-December. The goal is to ease the burden on fatigued healthcare workers and open up beds in ICUs. Last time, Covid cases were confined to certain regions, so people could be moved to other facilities when beds filled. This time, the virus is everywhere, presenting greater challenges. But even with that, deaths, though slowly ticking up, are a fraction of what they were in April. That, at least, is some comfort. And with the government stepping up, hopefully we can stem the tide of this second wave before too much damage is done to local businesses.

So here we are, again. Welcome to my Paris Lockdown Diary: The Sequel.

Enough complaining! Now for something fun.

Join me for a free Zoom chat, Sunday, November 1st at 4pm ET!

The Emily Conundrum: Real vs. Romanticized Paris in Fiction
Have you seen Emily in Paris, the latest Darren Star creation? It’s created a firestorm of criticism for not portraying Paris in a real light. But is that so bad? How real do audiences want Paris to be when it comes to TV, films, and books?

Join Lisa Anselmo, Juliette Sobanet and Gabrielle Luthy, three writers who live or have lived in (and written about Paris) as we try to solve a problem like Emily.

OPEN TO EVERYONE! So bring your glass of wine and your opinions. Register via this link to reserve your spot.
Download Zoom free, here.