A new book…and a recipe. My conversation with Samantha Vérant.

Welcome to the fourth in my series “Meet the Expats,” where I promote other undaunted foreigners who have chosen to call France home. Friend and author, Samantha Vérant, just launched her new book, a novel called The Secret French Recipes of Sophie Valroux (Penguin Books) about a disgraced chef who rediscovers her passion for food, and her roots. It’s a story rich in culture and chock full of delectable recipes— perfect for you foodie Francophiles out there.

I spoke to Samantha recently about her inspiration, her process, and her own passion for food. Best part? She shares a recipe from the book!

Lisa: Where did the idea for this novel come from?

Samantha: Sometime in 2016, I read an article highlighting the fact that Michelin had only bestowed their illustrious stars to one percent of female chefs; it made me very angry. My research began and I began to carve out the plot. As I wrote the first draft, more articles about misogyny in the kitchen popped up. The story I was inspired to tell practically wrote itself. My love for cooking and my life in southwestern France also provided inspiration.

Lisa: Is this your first published novel?

Samantha: This is my second novel; fourth book, total. I have two memoirs, Seven Letters from Paris and How to Make a French Family  published by Sourcebooks, plus a middle-grade novel, King of the Mutants, with Month9Books. Sadly, my middle-grade novel died a sorry death, but it still holds a huge place in my heart. A few years ago, I made the move to women’s fiction, focusing on things I know and love–namely food, France, and my former American life. 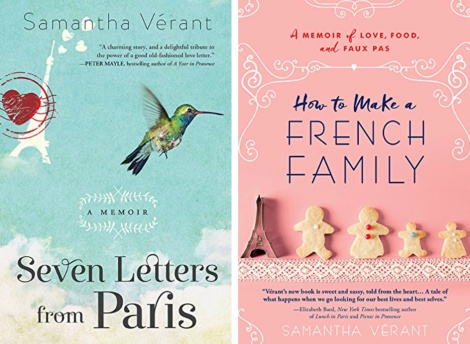 Lisa: After writing a few memoirs, did you find fiction freeing, or was there even more research and work?

Samantha: I “lived” the story in the memoirs, so they were easier to tell. Fiction is fun and definitely freeing, but making the switch was a bit harder, and I embarked on an adventure filled with a lot of gastronomic research, which was fun and delicious. I loved every minute of it.

Lisa: How did you research the life of a professional chef?

Samantha: I attended cooking demonstrations—one, a Michelin 2-star in southwestern France, the other, a class led by two Le Cordon Bleu chefs in Paris. I read books written by chefs: Eric Ripert, Anthony Bourdain, Gabrielle Hamilton, Ruth Reichl—and every “foodie” fiction book at market. I watched every episode of Chef’s Table on Netflix, as well as movies like the 100 Foot Journey (the book, of which, I also read), and French series/movies such as Chefs and Oui Chef.

Lisa: I’m obsessed with Chefs. I credit my improved French comprehension from watching that series. I assume you also cooked a lot.

Samantha: Yes! I cooked “French” and experimented in my little French kitchen.

Lisa: In How to Make a French Family you wrote about preparing a favorite American dish for your new family only to discover they weren’t so keen. But now you have become quite the French chef. I see what you’re posting on Facebook, and it’s very impressive.

Samantha: I was missing home when I made that tuna noodle casserole catastrophe. My husband and stepson liked it, my stepdaughter—not so much. It wasn’t a favorite dish of mine, but something I, for one reason or another, craved. I’ve made it again—and everybody liked it. In France, it’s hard finding ingredients for Mexican—I crave good Mexican! I’ve always been a determined chef, not that every meal comes out perfectly. Hey, we all make mistakes.

As for French cuisine, I’ve had an excellent teacher: my husband. I can make crêpes blindfolded now and even do “pan-flip.”

Lisa: Impressive! Were you always a foodie?

Samantha: I’ve always been a foodie, thanks to my mom and grandmother. Meals are important because they bring families together. I started cooking when I was nine (salads and then meatloaf—so fancy), and by the time I was twelve, I moved on to Gourmet Magazine and Bon Appétit. My sundae pie, which weighed about thirty pounds, is something my parents still talk about to this day.

Lisa: So, it seems that this book was your destiny. What’s your fave thing to cook?

Samantha: I really don’t have a favorite dish to cook—it depends on the season and what’s fresh at the market. One of my signature dishes, however, is gumbo with fresh okra, saucisse de Toulouse, chicken, and extra-large shrimp. I get my okra at the Asian market, which is oddly named Paris Store.

One of Samantha’s creations, which I featured in my Lockdown Diary.

Lisa: What’s the biggest difference for you between how French people cook and eat vs. Americans?

Samantha: I grew up in big cities, so I don’t see that much of a difference. I was eating snails and oysters at the age of sixteen. I can say, however, that French dinner parties last for hours and hours, filled with debates—they totally argue—and they stop serving wine after the cheese course. I mean, what?

Lisa: Right? My friend has elaborate parties, lots of courses, lots of discussions. They start at 8 p.m. but we don’t get to the main course before 11:30. I’m never home before 4 a.m.

They say that French people still take time to eat, and eat proper meals. You rarely see someone walking around in Paris, for example, eating a sandwich or even drinking a coffee. Do you find that to be true, or is that changing? For example, your kids: do they appreciate eating at table or are they being seduced by the fast-food culture?

Samantha: I can say that my kids thought “McDo” (McDonalds) was a gourmet restaurant—when they were younger. Now that they’re growing up, their taste buds have changed. (They both like sushi now! Yay!) I also think things in France are changing, because of fast food. Obesity is an issue here now, whereas it wasn’t in the past. So that book, French Woman Don’t Get Fat? It’s a myth. I gained thirty pounds when I first moved to France. I think we all have to adjust to eating habits, learn portion control, and to not stuff your face with baguettes (every day)—even though they are so delicious.

Lisa: Yeah, but you and I didn’t gain weight from fast food. It’s all that good French food! Speaking of…there are actual recipes in your new novel. How many times did you test the recipes? Which is your fave? And…would you share one with us?

Samantha: I tested the recipes over and over again. My family ate really well. Hello, lobster! In fact, I dreamt about the plat principal [in the book] and I made the recipe up. Yep, in this thick head of mine. It’s a filet of daurade (sea bream) served over a sweet potato purée and braised cabbage, garnished with edible flowers. It’s amazing but, honestly, there’s a lot of work involved. Since I was a master salad maker in my youth, I really love this recipe (la recette) below. It’s easy and delicious.

From The Secret French Recipes of Sophie Valroux. ©2020 Samantha Vérant.
Excerpted by permission.

Prepare the dressing. In a small bowl, combine 2 tablespoons Dijon mustard with the juice of 1 orange, with the balsamic vinegar. Add in the olive oil to taste and whisk until it’s a creamy (but not too thick) consistency. Add salt and pepper to taste. Put the dressing in the refrigerator until ready to use.

Slice the baguette(s) into rounds about a half inch thick, counting out two per person. Heat a frying pan with 2 to 3 tablespoons olive oil and a nice knob of butter over medium-high heat. Add the needles from the fresh rosemary to the pan or a tablespoon or two of herbes de Provence. Place the slices of bread in the pan, grilling both sides until golden. Set aside and repeat, if necessary.

When all the baguette rounds are toasted, in the same pan, add a dash of oil, the lardons, and the leeks. Cook until tender and slightly caramelized. Set aside and keep warm.

Gently encrust the goat cheese slices with the panko or bread crumbs, coating both sides. Fry them in the already greased pan for approximately 2 minutes per side. Place the goat cheese on the baguette toasts and get ready to plate.

Combine one cup arugula and half a cup endive on each plate. Add the lardons and leeks, splitting the ingredients per dish. Place two baguette toasts topped with panko-encrusted goat cheese on each plate. Scatter the pomegranate seeds and the slices of clementine or mandarin oranges. Drizzle the dressing, garnish with fresh tarragon . . . and serve. 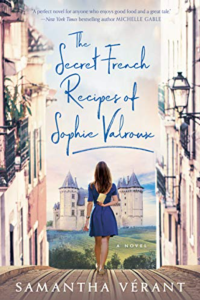 ABOUT THE BOOK
A disgraced chef rediscovers her passion for food and her roots in this stunning novel rich in culture and full of delectable recipes. French-born American chef Sophie Valroux had one dream: to be part of the 1% of female chefs running a Michelin-starred restaurant. From spending summers with her grandmother, who taught her the power of cooking and food, to attending the Culinary Institute of America, Sophie finds herself on the cusp of getting everything she’s dreamed of.

Until her career goes up in flames.

Sabotaged by a fellow chef, Sophie is fired, leaving her reputation ruined and confidence shaken. To add fuel to the fire, Sophie learns that her grandmother has suffered a stroke and takes the red-eye to France. There, Sophie discovers the simple home she remembers from her childhood is now a luxurious château, complete with two restaurants and a vineyard. As Sophie tries to reestablish herself in the kitchen, she comes to understand the lengths people will go to for success and love, and how dreams can change.

Available in paperback, e-book, and audiobook, wherever books are sold.

Here’s a link to a preview of the audiobook, narrated by the extremely talented Imani Jade Powers. 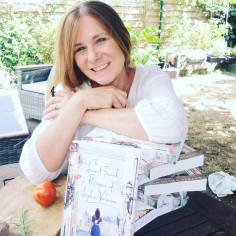 ABOUT SAMANTHA
Samantha Vérant is a travel addict, a self-professed oenophile, and a determined, if occasionally unconventional, at home French chef. She lives in southwestern France, where she’s married to a sexy French rocket scientist she met in 1989 (but ignored for twenty years), a stepmom to two incredible kids, and the adoptive mother to a ridiculously adorable French cat. When she’s not trekking from Provence to the Pyrénées, or embracing her inner Julia Child, Sam is making her best effort to relearn those dreaded conjugations.

Read my other interview with Samantha here.

4 responses to “Food, French Chefs, and Family: An Interview with Samantha Verant—Plus a Recipe!”