This morning I awoke to a comment on my blog, asking, “Lisa, Where have you gone?” Gone? Me? What? “Oh my!” I said, jumping out of bed. Had it been that long since I posted something?

It has, dearie me. Let’s not let that happen again.

Sometimes when things get a little intense, like nowadays, you can forget that there is a community out there, even when you’re the one who created that community. But that message today reminded me that not only was I not alone, but that others were perhaps counting on me. Or at least, thinking about me.

I’m happy to say that I’m well and kicking. I’ve been blessed with a windfall of projects that have been kept me busy morning ’til night. Plus, I’m out more since the weather has been nice and we’re able to move about freely. You can see my shenanigans on Instagram. All this has stolen away my precious moments with you, dear reader. So, to catch you up, here’s a quick recap of what’s been occupying my time the last couple weeks:

JULY 4TH: ENJOYING A BIT OF HOME FROM FAR AWAY

Not for vegetarians. Burgers at Joe Allen Paris, July 4th.

I’ve spent the last couple of July 4ths in Paris, usually picnicking with American expat friends, sometimes taking a boat cruise. This year, we started planning late, just the day before. We landed on an old favorite: Joe Allen Paris, a bit of home far away. It was just four of us, but that didn’t dampen the mood any. We were all so happy just to be out on a terrace—and I was ecstatic. Joe Allen has a special place in my heart because the one in New York’s Restaurant Row was a favorite hangout for my old theater crowd, where we’d go after our performances. Being able to gather with friends at Joe Allen in Paris, thousands of miles away on the 4th of July, was a huge gift.

It was a strange Bastille Day this year. Heavy clouds loomed overhead threatening rain. The mood in the city was decidedly mellow, what with the parade being cancelled (there was only a ceremony for VIPs), and the city banning congregations to watch the fireworks in person. All had to be watched safely distanced via television. I didn’t mind that much; I usually don’t attend the parade, and I only once tried to brave the crush of humanity on the Champs de Mars for the fireworks. I usually watch them from other, less overwhelming locales. But this year, for the first time ever, I did have a front row seat for the spectacular Bastille Day air show—from my window. The deafening roar of engines alerted me just in time to catch the planes passing overhead—a solid 30 minutes of various “V” formations, with fighter jets and even old WW2 mammoths gracing the skies over my head. Thrilling. Here’s a little video of one of the more modest formations, but there were many more spectacular moments that gave me chills.

In lieu of our usual plans, the gang decided to try to put a little picnic together in the Place des Vosges. But the forecast was looking grim, which precipitated The Great Bastille Day Picnic Debate of 2020. Texts and calls were exchanged back and forth. Should we move up the time? Should we bail? Polls were taken. Votes tallied. In the end, we ditched our picnic baskets and met up at a café in the Marais. Then the sun came out. Ah, Paris.

Watching the fireworks on TV.

This June, I was to lead a workshop as part of Paris Writing Retreats, a week-long writers’ conference here in Paris, but like many events, it had to be postponed until next year. Rather than wait around for 2021’s event, retreat founder Gabrielle Luthy and I have been working hard on a new project that is not hemmed in by location, set to launch soon. Stay tuned here for more!

I’ve also been giving some love to my other project Save the Paris Café, and received some press, thanks to a few articles about the expanded terraces around the city. Check them out here below, as well as some of our own latest articles, including this one from film producer Cori Coppola

Café Culture is Taking Over the Cobbles, by Caroline Harrap
Lisa Anselmo of Save the Paris Café talks about the upside of expanded café terraces due to Covid-19 regulations.

Out of Lockdown, Europe Begs Tourists to Come Back, Los Angeles Times
Save the Paris Café editor in chief, Lisa Anselmo, speaks about Paris cafés in a city without tourists.

Save the Paris Café, Taste of France Magazine
All about the fight to preserve café culture in Paris. For those who didn’t see the print article, you can read it now.

Feature article in Taste of France. That’s Yours Truly in the upper right!

Paris has become one big block party thanks to the new expanded terraces, designed to create social distancing during Covid-19. Tables are taking up formerly empty plazas, no-parking zones—anywhere they can find extra space—and cafés are creating gorgeous oases, with plants and even strings of lights. There aren’t enough days in the week for me to visit all the lovely inviting outdoor spaces. We’re hoping the city will make these permanent, because they not only help the cafés but can be a viable part of the pedestrianization plan for a greener Paris. Here are a few highlights: 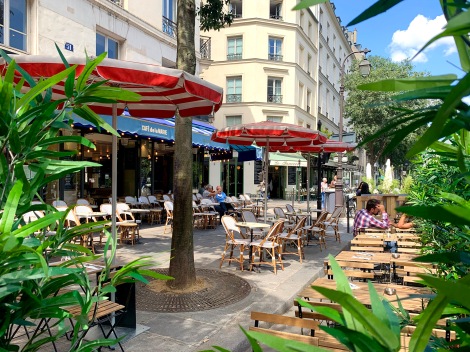 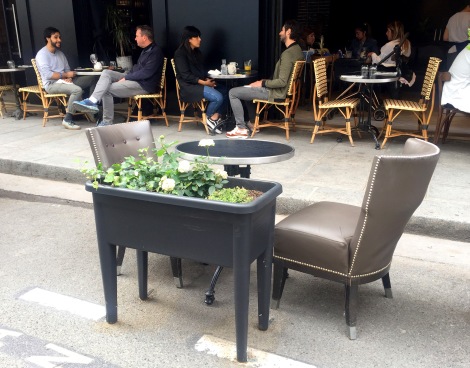 Audiobook recorded by the author. 4.5 stars on Amazon. Click book to buy.

11 responses to “Life After Lockdown: Where I’ve Been”