This year, thanks to my schedule, I’m getting a dose of the holidays in both Paris and New York. I spent most of December in Paris, watched the holidays unfold: shops transforming their windows with holiday displays, the local town halls (la mairie) festooning their facades, the florists putting out the trees for sale. Paris really embraces the season—not just in the main shopping districts, like in New York, but in nearly every corner of every neighborhood, where swags of lights adorn the streets, each with its own personality—from elaborate chandeliers in the swanky 8th arrondissement, to simple twinkling strands in the intimate lanes of the Latin Quarter.

My local town hall, decked for the season, seen from my favorite cafe.

Just as the city was hitting full holiday tilt, I had to leave. New York, and my sister, awaited me. As if passing through a portal, the season transformed from Parisian to New Yorker, the sweet swag lights of Boulevard Voltaire replaced by an Empire State Building emblazoned in red and green lights; the tiny, plump Christmas trees at my local florist on Avenue Philippe-Auguste dwarfed by the 7- and 9-footers for sale on 7th Avenue.

One thing my two cities have in common: Christmas markets. And for whatever reason, I visited four: two in Paris and two in New York. In Paris, I visited a major market in La Défense, Paris’s banking and business district. The market sits in the shadow of La Grande Arche, nestled within steel and glass skyscrapers. In fact, in that way, it feels a lot like New York’s Bryant Park Market, which is one of my favorites in that city, with a skating rink and a giant Christmas tree. I also visited two smaller markets: In Paris near Notre Dame; in New York at my local market in Union Square. Both markets showcased gifts by artisans and artists. 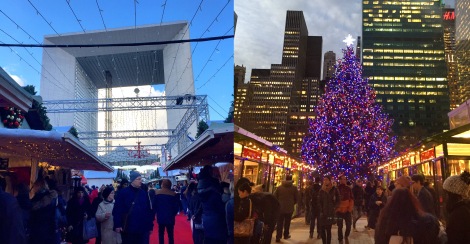 Exquisite handmade wares from Turkey, on sale at the Union Square Holiday Market in NYC.

In general, New York has it all over Paris in the Christmas market department, both in the quality of the markets themselves, and in the products for sale, which in Paris are often things made in China, vs. showcasing local crafts and companies (which they do so well in New York, particularly at the Union Square Holiday Market). This year, Paris’s Mayor Anne Hidalgo said “no” to the Marché de Noël on the Champs-Elysées because of a row with the company that runs it, and after rethinking the quality of the market. I agree the Champs-Elysées market was cheesy, and the one at La Défense, though festive, was not much better. Hidalgo would do well to have a look at what New York is doing.

The obligatory soaps from Provence, at the Marché de Noël in Paris. Some argue products like these are geared toward the tourists.

Still, politics and quality issues aside, I’m a sucker for a good Christmas market, and both cities’ markets are festive enough, even if you don’t buy anything except a cup of mulled wine (Paris), or mug of hot chocolate (New York). And certainly, I’m not advocating the commercialism of the season, but for me, the markets are a chance to mix in with the bustle of the season, and tap into the communal holiday spirit. And for that reason, I found myself in four of them this year. Whether in Paris or New York, I wanted to feel connected to the larger community, to walk among the smiling masses and share the joy with those around me.

Wishing everyone a holiday season and New Year filled with peace and joy. Lisa

This Christmas market in Paris sits in the shadow of steel and glass skyscrapers of La Défense. It has over 500 vendors.

The restaurant of the Christmas market dwarfed by La Grande Arche at La Défense.

A vendor at the Marché de Noël at La Défense. There are many in Paris city government who want to rethink these markets and feel the quality of the products can be improved. But there are a few interesting vendors to be found. 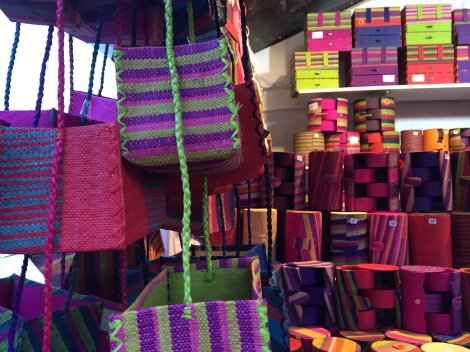 I was captivated by these lovely nativity figurines, as you can see in my reflection as I snapped this photo.

Among the things for sale: food. It’s oyster season!

Festive booths amid the steely skyscrapers.

The Holiday Market at Bryant Park in New York is one of my favorites. That’s the New York Public Library in the background. 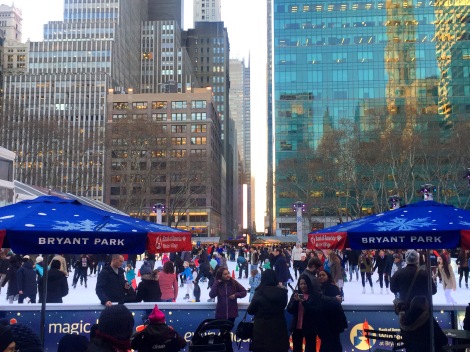 This market boasts a skating rink. A man proposed to his gal on the rink while we were there. (She said yes.)

A large tree festooned with ornaments and lights is the centerpiece of this market. 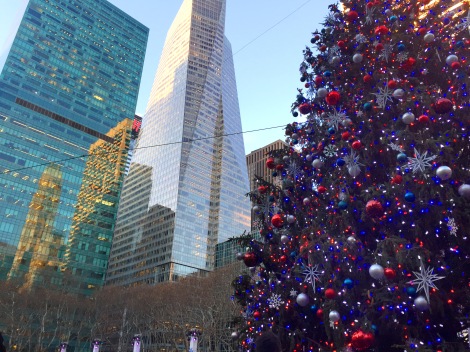 Semi-permanent structures of metal and glass, built especially for the market, create a winter village feel.

With my sister Maria (right), wishing you Bonnes Fêtes from NYC!

All photos this page: ©Lisa Anselmo, except where noted.

Read more of My (Part-Time) Paris Life: How Running Away Brought Me Home, available in hardcover, ebook, and audiobook (recorded by yours truly!). Order here.