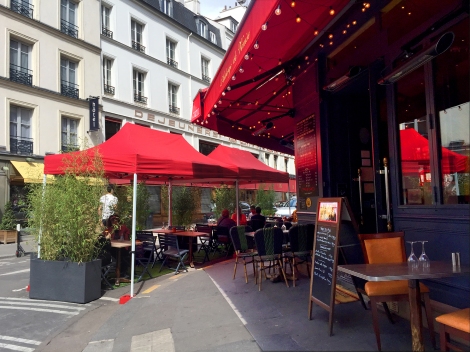 Restaurants and cafés have extended their terraces during phase 1 of déconfinement. Parisians love the additional outdoor space. Will this go away in the next phase? ©Lisa Anselmo

This Music Monday I’m serving up a double helping of song. That’s right! Two for one. (See links at bottom of post.) I have officially gone down the rabbit hole of 1960s power ballads, Bacharach, and Cilla Black. But more about that in a bit.

How many of you are still under some kind of confinement? If things are opening up, are you jumping in, or holding back? Does all the resurgence of activity create a sense of relief that there is light at the end of the tunnel? Or are you awash in anxiety because the virus is still out there?

I know these questions don’t have straightforward answers if you live in the States. Things are all over the place: better in New York; worse in Florida, Arizona, and others. Here, in France, the latest word is that we’re doing better than expected, and numbers of new cases are down despite déconfinement. Paris has apparently gone from an orange zone to a green zone. Yesterday, President Macron declared a “first victory against the virus” and is accelerating plans to ease the country’s lockdown in order to revive the economy more swiftly.

Revive the what now?

What I heard was “we’re good enough, folks, and the economy cannot wait.” Is it just me?

Maybe not. Macron is notoriously pro-big business, so it’s hard for the French to take what he says on face value. His approval rating, despite what many say is excellent handling of the pandemic, is still very low in a country where the wage gap is growing, and the average citizen feels disenfranchised by this current administration. They are still stewing over Macron’s proposal to revamp the retirement system. So is this about the economy, or are we really, really good to go to the next phase?

What’s in store? Outside of mass gatherings, most everything will return to normal: restaurants will be fully functional, nursing home visits will resume, schools will open, etc. We’re not sure what, if any, health and safety measures will remain in place, such as mandatory masks in public transport, social distancing and protections in public spaces, shops and restaurants. Those details will be rolled out soon. 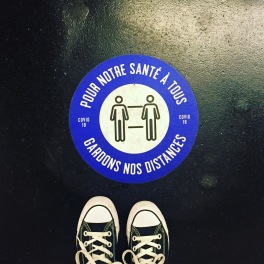 Social distancing signage in the Métro. Masks are also mandatory. How many of these safety measures will remain in place as we enter Phase II of déconfinement. ©Lisa Anselmo

In Ain’t Over ’til it’s Over

But one thing I do know? The number of people wearing masks on the streets of Paris today has surely plummeted. In a country where many see regulations as merely suggestions, it was already a struggle to get people to take minimum precautions. People were already saying, “the virus is over” after phase one of déconfinement. Macron’s speech will put the exclamation mark at the end of that thought.

Maybe it’s true. Maybe we’re in the clear. I want to rejoice, to fling my mask into the air like a carefree Mary Tyler Moore. But the thought of all that unbridled activity is pushing my anxiety levels up.

How do we begin to open up to this opened up world? We’ve been confined, hemmed in by guidelines for so long, and like when training a dog or rearing a child, there is security in limits that can actually create a happier more productive environment. Are we getting comfy in our confined world, especially a world that seems so chaotic and scary?

Is Freedom Only for the Brave?

You know me well enough by now to know that I’m talking in metaphors. This pandemic has become a platform for our anxieties, our disappointment in our leaders, our scrutiny of ourselves and others. As we reopen, it’s time to separate what’s really about the pandemic, and what’s our own personal baggage. In essence, to unravel the bigger problem from the crisis of the moment. If not, we will stay closed down inside, creating a hemmed in life of deprivation and caution in order to feel “safe.”

I’ve always been someone uncomfortable with the unknown, the great big world “out there”—never one to fling her arms open and cry, “Bring it on!” Maybe some of you are the same. As our governments drop more safety measures (for whatever reason), we may feel more vulnerable. We’ll have to take each step thoughtfully, stretch our comfort zones at our own pace. This pandemic can be a classroom, teaching us about how much risk we are willing to take in order to live the life we want.

But as Anaïs Nin said, “Life shrinks or expands in proportion to one’s courage.”

Speaking of abundance, I’m offering two versions of the same song today: “Anyone Who Had a Heart,” another Bacharach/David gem. These two very different arrangements, both by Bacharach, were created for Dionne Warwick (1963) and Cilla Black (1964). Warwick recorded hers in the key of Ab but I did my version in Cilla’s key (G), so you could see the comparison more easily.

Warwick’s arrangement is more elegant and understated, as is her vocal approach. Typical of her. Cilla Black’s arrangement is more youthful, more powerful—more emotional, too. As a singer, I prefer the control of Dionne Warwick’s voice to Cilla Black’s uneven and sometimes brassy vocal production, but there is no denying that her version makes me cry. In fact, while I did the Warwick version in one take, it took me five tries to record Black’s version because I kept choking up. I’m not sure why; maybe because the arrangement begins to tap into the emotion in the song. Or maybe it’s the backing vocals, a wild and almost wailing sound.

This song was a b*tch to sing. I was surprised. I had to work hard to keep my voice open. But when I listened to both Warwick’s and Black’s recordings, I heard the same challenges appear in their voices. Even Warwick’s voice tightens at the top; I wonder why they didn’t drop it down a half tone. But maybe the key isn’t the issue. I tried four different keys and it made no difference. The challenge is in Bacharach’s arrangement. Emotionally, the song begs to be sung full throttle, open and free. But musically, he keeps you controlled and hemmed in. The staccato high notes (“So” and “You”), the relentless almost slavish drum beat—never allowing you to let loose or make it your own. Just as it builds momentum, he nips it back in. It’s fine if you’re a Dionne Warwick, all control and elegance, but I have newfound respect for Cilla Black, forced to contain that monster voice to fit the song, which I’m convinced was not written with the human voice in mind. I understand it took many, many takes to get Cilla’s track to Bacharach’s liking, but it garnered her first number-one hit in the U.K.

I sing both versions in the style of their arrangements, but I do not attempt to mimic the singers.

Anyone Who Had a Heart in the style of Cilla Black
Music by Burt Bacharach, words by Hal David; vocals by Lisa Anselmo

Anyone Who Had a Heart in the style of Dionne Warwick
Music by Burt Bacharach, words by Hal David; vocals by Lisa Anselmo

Listen to all the Music Monday offerings here.

Audiobook recorded by the author. 4.5 stars on Amazon. Click book to buy.

5 responses to “Life After Lockdown: Abundance Hemmed In”