It was a beautiful day, too beautiful to be stuck inside. Confinement was over; I was no longer restricted to a 1 kilometer zone, so I slipped on my mask and stepped out into the world. It felt like a vacation, a day off after weeks under the big thumb of lockdown.

Destination: the Marais to visit my buddy at his restaurant, Breakfast in America, where they had started doing takeout (restaurants are still closed for sit-in meals). In my bag: sanitizing gel for my hands, sanitizing wipes for surfaces, a spare mask, latex gloves—you know, the essentials for any carefree day out.

“How could I possibly be expected to handle school on a day like this?” — Ferris Bueller’s Day Off

Let’s be clear about something: I am no Ferris Bueller blithely going about life. I’m much more like his buddy Cameron, the nervous one with the asthma. This day out was not something I’d be doing lightly, or easily. I mean, mixing and mingling with the unmasked masses?

The Marais is about 40 minutes’ walk from my place in the 11th, so (and I can’t believe it myself) I decided to give the Métro a try. Yeah, that’s right, I though the best place to be during an active pandemic was trapped underground in a tube with a bunch of people. But I figured we’ve all been quarantined for two months so the safest time was probably now. And masks are mandatory on public transport, so at least people on the train would be forced to be aware that it’s not business as usual. At least you’d think, right?

Every other seat on the train has a sticker that demands it remain unoccupied in an effort to spread people out. Same for the floor space. But wiseguys have pulled the stickers off in some places, and I was about to find out that people cannot use their own heads about leaving space between passengers.

The train was not packed by any means, plenty of space between people, but nearly every allowed seat was filled. I managed to find an empty two-seater (two seats facing) and set myself down tentatively. Was sitting was a good idea? Across from me were two woman at a four-seater sitting diagonally from each other as the seat stickers indicated. It all seemed orderly enough. Then trouble boarded the train.

A woman looked around for a place to set herself down as the train exited the station, homing in on the seat across from me in my two-seater. She actually wanted to sit facing me, knees touching and all.

“Sorry, madame,” I said, waving my hand over the seat, “we have to keep the distance.” La distance. Sadly, wiseguys had gotten to the stickers so I had nothing to prove my case, and apparently, this was the first time this woman had ever heard of social distancing.

She protested, pointing to the women at the four-seater. Now I was forced to explain that those women were sitting diagonally, not face to face. “Here, it’s too close.”

Still flummoxed by my logic, she would not leave me alone. “It’s forbidden,” I insisted, hoping the word interdit would have an effect. “Because of Covid,” I pressed on. “Co-ro-na-veee-ruuusss. So sorry, madame.” I made the big eyes and the praying hands to add weight to my plea.

The conflict was starting to draw attention. Abort! my brain warned. Maybe the best thing was to just surrender my seat—even though the woman was young(ish) and able. And here is where things went pear-shaped. The woman across from me offered her seat to the woman, but not before giving me “the look.” I was the one being unreasonable, evidently.

“This is the part where Cameron goes berzerk.”—Ferris Bueller’s Day Off

“No, no,” I said to the misguided Samaritan, shooting up from my seat. I motioned for her to sit her ass down while I vacated the two-seater. “There. She can have both seats. Since it’s so [expletive deleted] important to you.”

Yeah, yikes. Within five minutes, the Métro had brought out the worst in me. I stood fuming by the doors, aching for escape from this tube traveling in Upside-Down World. Was this day out a bad idea for a Cameron like me?

Nothing some pancakes won’t cure

I sprinted up the steps out of the St. Paul Métro station, shaking the proverbial dust of that experience off my shoes, and dashed across Rue de Rivoli to Breakfast in America on Rue Malher.

“Here she is!” Julien exclaimed from behind a protective cellophane screen stretched across the door. He called to Craig to come see who had turned up. Craig appeared, the skin around his eyes crinkling from the smile hidden behind his mask. We all hadn’t seen each other in the flesh since lockdown began. In fact, the last café meal I had was with Craig at the venerable Café Louis Philippe in early March.

Their bright faces and the bright neon “OPEN” sign melted my stress instantly. It was all going to be okay. There would be, after all, pancakes.

Craig Carlson & Julien Chameroy greet me at the door of Breakfast in America. Craig is the bestselling author of Pancakes in Paris and the upcoming Let Them Eat Pancakes.

Breakfast in America is a very popular eatery in Paris (there are two), particularly among Parisians who love the American diner theme—and the American pancakes. Back when I was just vacationing here, my Parisian friend Fabien often tried to take me to the diner, but the last thing I wanted was to eat American food in France. It’s a very different story now that I live here. A glass of real iced tea and some fluffy pancakes with maple syrup are like mother’s milk to an expat. On my big day out, after being in lockdown for two months, it felt like coming home after being away at bootcamp. 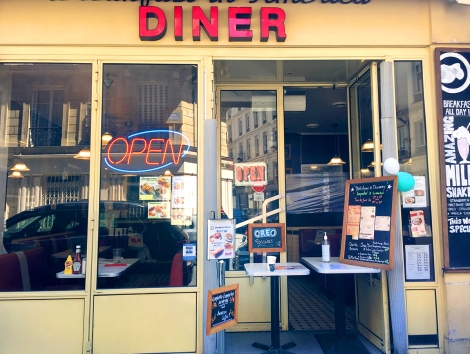 Did my heart good to see them open for takeout. ©Lisa Anselmo

They’re offering nearly everything on their menu for takeout, but after much deliberation (and a ton of suggestions from Craig) I stuck with pancakes. “Chocolate chip? Blueberry?” he prodded. Nope. Why tamper with perfection? Plain is what I like. Plain is what I ordered. With real maple syrup. And an iced tea, of course.

Once I’d eaten my weight in buckwheat, and since it was the end of the lunch service, we all three took a walk together. I hadn’t seen the Seine since early March and was itching to go. I needed to cast my eyes on the water as if to prove I was still in Paris.

Yup, it’s still there—and so is everyone else

The Marais was teeming with people, especially along the river—often in groups, many unmasked. We had to bob and weave our way around. A game of dodge germs. We agreed that we were probably safe enough, a moving target outside in all that hot sun. And just to be together was its own tonic. 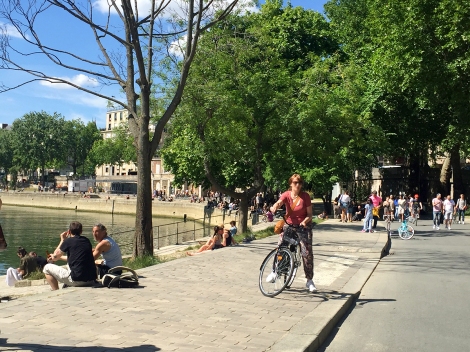 Wow, that’s a lot of people. We did not walk through that solid mass of humanity. ©Lisa Anselmo

The Seine, impossibly calm, under the Pont Marie ©Lisa Anselmo

“Are we getting ice cream?” Craig asked as we crossed Pont Marie toward Ile St. Louis. I reminded him that I had just sucked down one of his famous Obama milkshakes for dessert. “But that’s liquid form,” he said. “It’s not the same.”

I couldn’t argue with that logic, I mean who would? And eating ice cream from Berthillon on Ile St. Louis is the right of every human. I ordered a small cup with two scoops: chocolate and hazelnut. It was only when I went to take a bite from the tiny spoon that I remembered I was wearing a mask—a sign that this wasn’t a normal day. The other sign: zero tourists on the island, something not seen since the Nazi occupation. I’m guessing. Certainly not in my lifetime, anyway. I was one of those tourists the first time I had Berthillon ice cream, at age sixteen. 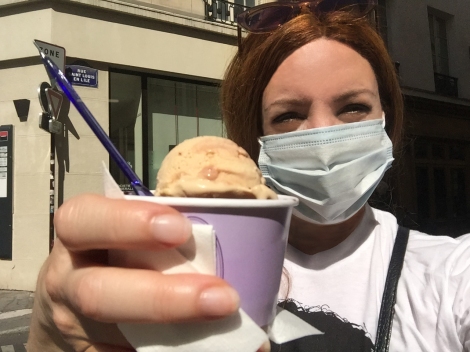 Squinting in the sun with my prize. Now how do I eat this?

This sun baked into us as we walked along the quay. I couldn’t remember the last time I hung out with friends on the Seine like this. Doing nothing, just soaking up the day. Was it last summer? Felt like it. The Seine was a bright lime green, glassy calm and clear for the lack of boat traffic. It looked more like the lawn of the Champs de Mars. Couples and small groups social distanced on the embankment, spaced almost perfectly equidistant, like the trees that lined the river. When this all began in March, we thought we’d never picnic on the Seine again. With a little luck, we may be able to keep up like this, I thought. We might even have an almost normal summer. Wouldn’t that be something? 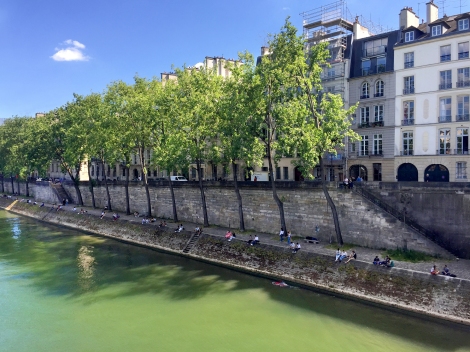 Social distancing on the Seine. If you look closely, you can see a man swimming in a red wet suit, a Paris fireman in training. ©Lisa Anselmo

“L’Escale is opening up!” Craig said, drawing our attention away from the river. L’Escale is a fixture on Ile St. Louis, a family-owned café that has been installed in the same enviable spot facing the river for decades. A few minutes before, we had just been lamenting that it was closed because of the virus, and now someone was setting up a table by opened doors. “Boissons à Emporter” boasted a blackboard perched on the table. Takeout drinks. “Let’s go,” Craig said, starting for the café. “I’ll get a coffee. I want to help them out.” He knows full well how hard it is for restaurants to scrape out a living these days. 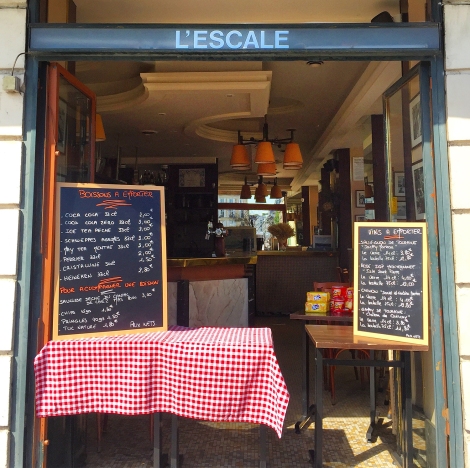 I was overcome with joy to see the café alive again, even in a modified way. “I’m getting a glass of wine!” The last time I had a glass of wine on a café terrace was over 11 weeks before. “Hell, yeah. Wine.” There was no table to sit at, and the wine was served in a takeaway cup, but it didn’t matter. Some part of me was being restored standing there on the quay overlooking the Seine, sipping my glass of rosé in the sun. It wasn’t like before—what might never be again—but in this moment, it was not bad at all.

It’s not a café terrace, but it’s not half bad. ©Julien Chameroy

Craig and I give you a virtual tour of Paris

Read more of my story. Click book to buy.

21 responses to “Life After Lockdown: My Big Day Out”