They said it would happen but I didn’t believe them. Back when I was just visiting Paris, I’d heard some expat friends tossing random French words into their English conversation and I would think, Ew, how freaking pretentious are you? Were they trying to convince me how assimilated they’d become? Oo, look at me! I live in France now! Oh, please—s’il te plaît. I mean, it’s not like you can actually forget the word in English.

Um, turns out that—bah ouais!—you can forget the English word after a few years of speaking French all day. And certain frequently used French expressions and pronunciations begin to take over your daily speech, regardless of the language you’re speaking. Insidious little buggers.

Like it or not, here are the top 10 French expressions that I have to admit are now part of my everyday English:

1. AND SPEAKING OF “PARDON” 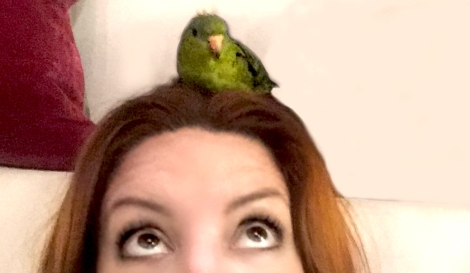 Excuse me? My foster bird used to like to sit on my head.

[paʁ.dɔ̃] Meaning: Excuse me. > No, I am not English. “Pardon” is not a word that was normally in my vocabulary. I’m a New Yorker. When pushing past people on the Subway during rush hour, we employ the brusk but effective, “‘Scuuuuse me!” But on a recent stay in New York, after several months using the Paris Métro, a polite “pardon” popped out of me unconsciously—French pronunciation and all. It was then I realized “it” had happened: the French words I used daily were taking hold, imposing themselves on my English. (In case you’re wondering, “pardon” gets you nowhere in the NYC Subway.)

Things that make you go, “Ouf!”: a hot guy, or climbing these stairs with heavy grocery bags.

[oof] Approximate meaning: Phew! Whew! Wow! Man! > I’m not sure when this word entered my English speech, exactly, but it’s like I was born saying it. Just the other day, for example, I had hauled a load of groceries several blocks, then up two flights of stairs. “Ouf!” I said, as I finally unloaded the heavy bags in front of my apartment door. And the kicker? There wasn’t even anyone around to hear it, so you can’t say I was showing off. Some French expressions with “ouf!” according to wordreference.com? De ouf = wow factor; sans avoir eu le temps de dire ouf = before he knew what hit him.

When your neighbor’s leak does this to your wall. Yup, there’s a word for that.

[sort of: pu-teh] Literal meaning: whore; pejorative: sh*t, f*ck (You get the picture.) > Evidently, I curse like a truck driver because this word stuck pretty much right away. I no longer say any of the English-language equivalents. Maybe in my head I think I’m not really being foul-mouthed because it’s in French. French is classy, mais non? I extol the wonders of French swear words in my memoir My (Part-Time) Paris Life, Chapter 12: “Living the Dream?” where I talk about my neighbor’s leak trashing my apartment. That merited a lot of French swear words. 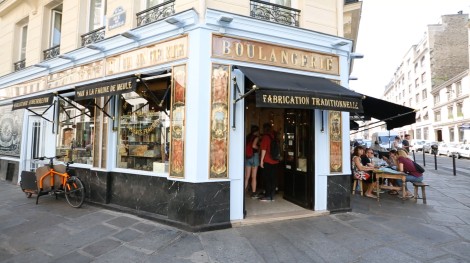 [boo-lanzh-uh-ree] Meaning: Bakery > Okay, this one’s not my fault. With the exception of Le Pain Quotidien, there is nowhere in my New York neighborhood where you can buy your daily bread outside of the grocery store (and Amy’s). I never say the word, “bakery” anymore because my last good ol’ fashion bakery on lower 6th Avenue closed 15 years ago. Boulangerie is the only word I have to describe the place where you do that thing. So it’s “boulangerie” no matter where I am. Check out this episode from my series about my favorite boulanger in Paris, pictured here: Du Pains et des Idées.

[ter-ahss] Meaning: The part of the sidewalk where the café has their outside tables > I honestly don’t know what we call this in New York. I can’t even remember referring to it. Usually, we just say, “I’d like an outside table.” A “sidewalk café” is the closest thing we have to describe a restaurant with tables on the sidewalk. Maybe they refer to a “terrace table” in other parts of the U.S., but not in NYC. In Paris, especially with all the cafés, the word “terrasse” is used several times a day. So, yes, it’s now what I call the place where there are outside tables, even in New York. After the terror attacks of November 13, 2015, where terrorists targeted people sitting outside cafés, the #jesuisenterrasse movement was created as a form of protest against the fearmongers, a way of saying, “you can’t stop me living my life.”

On my phone posting to social media during Dîner en Blanc. I have crappy réseau.

[ray-zo] Meaning: Network, but it can also be used for cellphone reception as in “J’ai pas un bon réseau“—I don’t have a good network (reception) > This word latched onto me the first time I heard it. Why, I cannot say. But now it’s in my head, and I honestly cannot remember the expression in English most times. I have to poll every expat in the room: “What’s it called?” “What do we say?” The first time this happened, I was mystified. How could I possibly forget a word I’d been using for…well…ever? I didn’t know whether to be excited that French was grabbing hold of my brain, or concerned about early onset dementia. I’m still not sure.

[kay] Meaning: A structure built parallel to the bank of a waterway; quay. In France, also a train platform > “Meet me on the quai at the Oberkampf Métro station,” my American friend instructed me in a text. “WTF is the quai?” I texted back. My phone rang. “The quai!” she repeated, as if that would make it clearer. “Where you wait for the train!” Her voice was tinged with annoyance as if I was the one being obtuse. “You mean the plaaatformmm?” I replied, equally annoyed. “Who the hell says quai?” Well, I do, now. Every English speaking expat I know calls the platform the “quai” so I had to bend to the will of the masses. These days it takes an effort to say, “platform.” I know. A little part of the New Yorker in me just died.

This is my canape. ©Lisa Anselmo

[cah-nah-pay] Meaning: Couch, sofa > In 2012, I bought my place in Paris and had a blast furnishing it on a dime. I quickly mastered the French words for all the various furnishings. I’ve forgotten most of them, now that the house is furnished—except (for some reason) the word for couch: canapé. I use it exclusively these days, erasing from my vocabulary any other word for this item. Maybe because it’s prettier than “couch,” the word I grew up using, or perhaps it’s because canapés make me think of finger sandwiches. And who doesn’t love high tea? Take a tour of my Paris apartment, here. 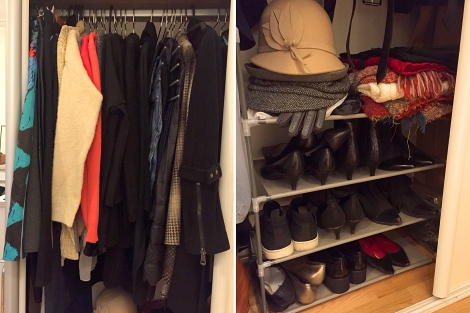 [ranzh-mahn] Meaning: Storage > “This apartment has amazing rangement!” I said to my American friend, while viewing an apartment near the Bastille she’d wanted to rent. She, a non-Francophone, looked puzzled at the word I’d just flung at her. I pondered a few seconds, poking around my brain for the word in English. “Stowage…stockage? No—storage!” This is what happens when you spend a year Paris apartment hunting online. The descriptive words used by Parisian real estate agencies—agences immobilières—to describe your prospective life-changing dream house become very precious to you, and therefore seared into your brain. No other words, besides French ones, can describe the fabulousness of a Paris apartment. “Storage” sounds like a place you cram full of old camping gear. “Rangement” speaks of limitless possibilities—the range of wonderfully organized and perfectly curated shoes you can put inside. The word for closet, by the way: le dressing.

One of the last “vitrine” displays of the defunct department store, La Samaritaine, in Paris. ©Lisa Anselmo

[vee-treen] Meaning: storefront window; glass display case > This is another one of those words like réseau and rangement where I really have trouble remembering the English equivalent now that I’ve embraced the French word. It’s just more efficient than “storefront window display,” so it wins out when I’m speaking off the cuff in my mother tongue. “Hey, did you see that blue dress in the vitrine at BHV?” Yup, I’m that person now. Here’s a fun one: the French phrase for window shopping is “faire du lèche-vitrine” or to do some window-licking. Yes, I said licking. The French are really passionate about their sales. Yum!

Learn more about the journey that led to My (Part-Time) Paris Life in my memoir of the same name, ON SALE NOW!