This was originally written for my memoir, My (Part-Time) Paris Life: How Running Away Brought Me Home, published by Thomas Dunne Books/St. Martin’s Press, but didn’t make the final edit for reasons of story flow. In this deleted chapter, I talk about the challenges of living longterm in Paris (specifically the difficulties of everyday tasks with what was, at the time, lamentable French) after having previously stayed in my apartment for only a few days at a time.

The time had come. I couldn’t put it off anymore. I didn’t know how I was going to do it, but I just needed to be strong and get it done. I’d come far, been through a lot. I could do this.

I faced my foe, my lave-linge, which squatted under my counter, its large round eye staring me down. The brand name imprinted on its face, Candy, said, “Come play!” The cryptic symbols on the control panel hissed, “…if you dare.”

The washing machine came with my apartment, but I hadn’t used it since I’d bought the place because I would only stay in Paris a few days at a time. My friend Fabien, who I’d hired as a kind of property manager, washed my sheets and towels for me, and I’d wash the clothes I’d worn once I was back in New York, where washing machines made sense. But now that I was living in Paris, and had gone through all my clean clothes and sets of sheets, there was no way to avoid laundry day chez moi.

My confidence had already been shaken after a trip to the store to buy laundry detergent, fabric softener, and bleach. Should be easy enough, right?

Wrong. The French like to put all their liquid soap products together in one aisle. That means dishwashing liquid, hand soap, and laundry detergents are often stocked side by side, especially if the store is small. I’d spent ten minutes trying to divine which of the indiscernibly packaged soap products was intended for laundry. You’d think they’d help a girl out with an image of a shirt, or something. But no. My French phone was useless for translations: no data plan. I’d thought the products would have been obvious by the brand or label, but nothing in my new life in Paris seemed easy, or straightforward.

I was going to have to work this out using only high school French and my housekeeping instincts. I walked down the aisle again, and one bottle caught my eye. The brand name was foreign, but the image on the label was happily familiar: a baby wrapped in a fluffy blue towel. “Assouplissant” it claimed. The word was close enough to “supple” to take a risk. Baby in a supple towel? Fabric softener.

I studied the bottles stocked beside the assouplissant for more clues. There, I found something called lessive. It looked enough like laundry detergent—some in tubs, some in large bottles. It was no wonder, though, that I’d passed it up before, with brand names like Le Chat. The Cat? The name hardly inspired confidence. After another five minutes, anxiety setting in, I made the only educated choice I could: the detergent with the nicest scent.

I was in the home stretch, only bleach left to buy. But just as the clouds were lifting, it went foggy again. Stocked beside the laundry detergent were tubs of Vanish. Vanish? Wasn’t that toilet bowl cleaner? I scanned the laundry products again. Nothing. Not even the word “white” on the a label—blanc—which might have been helpful. So, once again, I put my nose to work. What I couldn’t read I could smell, and my nose lead me to something with a name I wouldn’t have imagined in a million years: javel. I was exhausted already and I still had to actually wash the laundry. 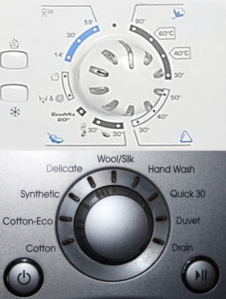 Top: The mystery that is French washing machines. Cycle selection is by temperature—in Celsius, no less. Why would I know that? Bottom: Blessed American laundry logic and simplicity.

My expat friends had warned me that simple tasks would become herculean in my new foreign home, but I had no idea how true that was until I tried to comprehend my washing machine. The first and biggest mystery? Wash cycles of French machines are determined, not by type of garment, but by specific degree of water temperature—in Celsius. Did I want a 30°C wash, 90°C? Who knew? Why would anyone need to know that? Warm, cold, whites, colors, permanent press, delicates—these were simple choices that made sense. Shouldn’t the machine know how hot to make the water? Isn’t that the point of automating the washing process?

I was quickly discovering that, much like French bureaucracy, laundry in Paris seemed overly complicated, and illogical.

The machine’s instruction manual should have provided enlightenment, but the instructions were, of course, in French. I could read French magazines, but when you’re reading an article about a chateau in Normandy, you can get away with the gist of the story. And the photos help a lot. But this was laundry machinery. What if the one thing I didn’t grasp made my jeans two sizes smaller?

Oh, mon Dieu, how was I ever going to make it here in Paris if I couldn’t even do a load of laundry without breaking into a cold sweat?

After searching online in vain for an English-language version of the instructions, I had no choice but to retype the entire instruction manual into an online translation program in hopes that it might bring understanding.

I typed the entire instruction manual for my washing machine into an online translation program. Now that’s desperate. ©Lisa Anselmo

Word by word, the instructions became clearer—but that didn’t mean they made sense. One hundred and eighty minutes for a load of laundry? What could possibly justify over two hours of washing time? Back in the States, I could wash bedding and rugs in just forty minutes. What was this machine doing with my clothes all that time, sending them out somewhere across town through a secret portal?

Maybe the French like to take things at a leisurely pace but I had better ways to spend my day. Out of the three loads I had planned, I resigned myself to only one for the day. It was all I could handle emotionally, anyway. I selected the shortest cycle I could find—one hundred and ten minutes—and tossed in the detergent pod. As I hit the button labeled “Marche” to start the wash, I held my breath.

Water filled the tank, the drum agitated, and we were off! My clothes swished silently in the machine, suds building. I was so proud of myself that I shot a video to mark the milestone.

Two hours and a puzzling three rinse cycles later, I was hanging my clean clothes on the drying rack. The fresh scent of detergent filling my apartment was almost as sweet as the smell of victory. Maybe I’d make it in Paris after all.

Learn more about the journey that led to My (Part-Time) Paris Life in my memoir of the same name,  ON SALE NOW!

37 responses to “Keeping House (In French)”