I feel very fortunate to be able to live in two of the greatest cities in the world. But there are some downsides. Here, in no particular order (unless it’s subconscious), are a few of the things I really miss about the City of Light when I’m in the Big Apple.

1. A GOOD BOULANGERIE ON (NEARLY) EVERY CORNER

Paris is not a place to try to cut back on carbs. Nothing beats the bread in France, even the crappy industrial stuff is pretty damn good. They’re so serious about their bread that there are laws about how it should be made. And you really do see people walking around with a baguette under their arm en route home to dinner. Photo: ©Nomadic Frames

2. DITTO FOR FROMAGERS AND CHOCOLATIERS

I never eat cheese, but when I do, it’s in Paris. [Cue “lactose intolerance!” scene from French Kiss.] So many varieties from all over the country—I just grab a baguette from the corner bakery and some runny goodness from the fromager on the other corner and, voilà…dinner! (For the third key dinner ingredient see #3.)

This is the wine selection at my local Franprix grocery store—the grocery store! French wine as far as the eye can see. Sure you can spend 15 euros but why when a really nice red from Burgundy can be had for under six bucks? 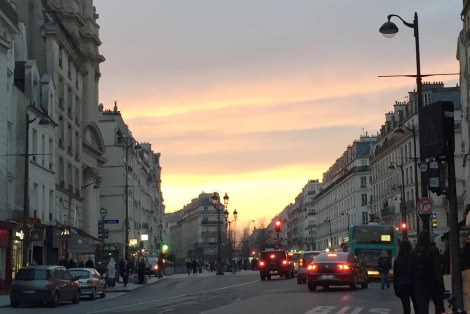 Paris is a human scale city, with the majority of buildings having six stories. The open access to the sky and light acts upon my psyche, cheering me up, even on a cloudy day. It’s only when I return to New York that I realize how overwhelming the pace and scale of that city is, how oppressive the buildings can feel as they loom over you.

5. BEING ABLE TO WRITE IN A CAFE FOR HOURS

This is something Parisians take for granted: being able to sit in a café as long as they like, taking life in long strides. I do most of my work at a local café, surrounded by Paris life. This is not something you can do easily in New York, where turning over tables is a priority. I struggle to find places to work, and end up mostly staying at home, which feels pretty isolating.

6. A CLEAN AND EFFICIENT METRO SYSTEM

I love New York, I do, but the Subway is disgusting and it’s not uncommon to wait as long as 15 minutes for a train during rush hour. Rush hour! The Paris Métro is much cleaner, and runs with almost alarming precision. Signs on the platforms announce the arrival time of the next train, and the train after that, so there’s no need to lean over the edge of the platform risking your life to look out for oncoming headlights. The most I’ve ever waited for a Métro was six minutes; the average time, about three, even on Sundays. 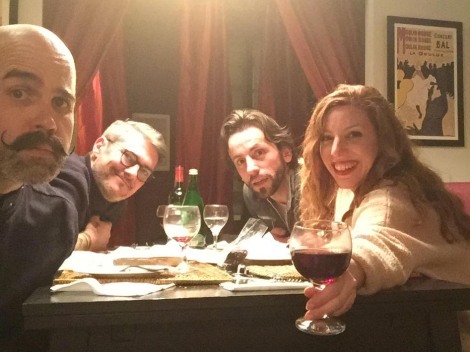 Maybe it’s the tiny apartments in Paris, but everyone is out all the time, and will travel across town, even after work, to meet up with friends. In a country where people work to live, time spent with friends and family is a priority. I have plans every night, and often lunch plans, as well. I can’t say the same for New York. (Pictured: My “boys,” all of whom are featured in my memoir, My (Part-Time) Paris Life. L to R: Geoffrey, Christophe and Yann.)

8. THE VIEW FROM THE BUS 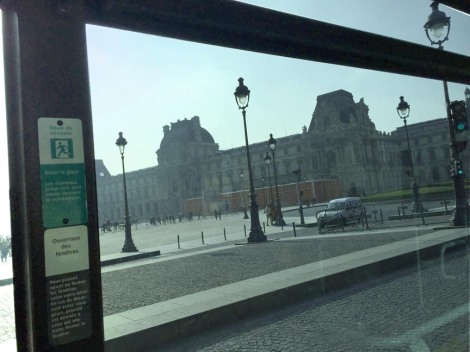 Another wonderfully efficient transportation system, this one with a view of the City of Light. I resisted the bus for years, but now I opt for it whenever I can, because, well, look. If you’re visiting Paris, take the bus wherever you go, cheaper than a tour bus. Some of the best lines for scenic views through the center of town: 69, 76, and 96.

You just can’t get anything like it in the States. How is it so creamy and…buttery? Is it what they’re feeding their cows? My favorite is the butter from Brittany with the salt crystals in it. I’m so obsessed with the butter in Paris, I blogged about it, here.

This is the magic hour between lunch and dinner when everyone gathers at cafés, often at the beloved terrace tables, to have a drink and a little nosh. It’s my favorite time of day, and a favorite pastime. Many New York restaurants are often closed during this time in order to prep for dinner service, but they are really missing out on some serious revenue, huh? For more than one reason, New York could stand to take a page or two from the Paris playbook, mais non?

All photos this page, unless otherwise indicated: ©2017 Lisa Anselmo

Learn more about the journey that led to My (Part-Time) Paris Life in my memoir.
ON SALE NOW
On Amazon
On iBooks
On Barnes & Noble
On Books-A-Million
On IndieBound