It’s been one week since terrorists shook up our world in Paris, hitting the heart of the popular district I call home. I’ve tried several times to write, but cohesive thoughts would not come. All I could hear was screaming in my head.

Not here. Not in my Paris.

After my mother died, Paris saved me. It was the one place that seemed to set me to right, where the heaviness of the world didn’t press down on me. Where I felt truly free. And even when it was bad, like the leak that damaged my apartment, it was still good. 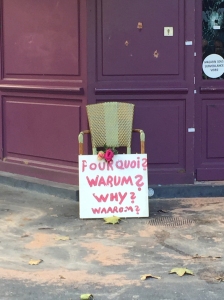 A touching tribute outside Cosa Nostra asks, “Why?” Bullet holes are still evident on the facade of the building. ©Lisa Anselmo

Everything changed Friday: Sitting at a café terrace—a beloved pastime—will never have the same ease again; the sound of that classic European two-tone siren will never amuse me again; shopping in a crowded street market will never feel free again. I’d been through this on 9/11 in New York; I never wanted that to come here.

It had been a mild Friday night for November in Paris; I’d toyed with finding a dinner mate and hitting a local place. I’d walked past Le Petit Cambodge earlier in the day, but ruled it out because there is always a line on weekends. In the end, I decided to stay in and write, but not before I took a walk in the neighborhood, past the Bataclan where people were lining up for the concert. That was a little before 8:00p.m.

Shootings near Republique, a text came from a friend who lives close by. Then another text: Looks more like Goncourt. Another: Just heard explosions.

The day after the attacks, a man sits solemn in a café. ©Lisa Anselmo

We watched the reports on France 24, connected by our phones, each of us too terrified to move from our homes. It was happening all around us, on every side. Le Petit Cambodge, where I had just been earlier, and where I’d eaten lunch with my sister a few months before, had been a target. La Belle Equipe, just up the street from my apartment, also hit. The latest news blurb: Terrorists had taken the Bataclan.

My mind flashed on the faces I’d scanned as I walked by the theater an hour earlier. What of them?

In the days that followed, news trickled in of those who’d lost their lives. In a tight community like ours, it’s impossible not to know someone connected to a victim, especially with so many ordinary, local hangouts attacked. The shooting at La Belle Equipe, where 19 died, affected more than one café. Many of the victims—some reports say as many as 11—worked at or were regulars of the nearby Café des Anges. They were celebrating a friend’s birthday. These were people we saw every day, our neighbors. Beautiful, young, and full of life.

My neighborhood, my favorite haunts. It could have been me. It was just dumb luck that it wasn’t.

It’s the personal nature of these attacks that makes us so uneasy, so angry. The killers came right up to our faces, where we eat, play, live. How do you carry on after something like that? How does a city, where the sidewalk café is an integral part of life, recover?

I’m still rattled and impotent, but Parisians, who drove out the Nazis 70 years ago, started fighting to reclaim their city almost immediately after the attacks. They took to their cafés, sitting on the terraces, enjoying their lives as usual. I thought it was denial, and maybe in part it was, but I’m learning it’s also something else, something very different—and very Parisian: résistance. Life will go on. It must go on.

Cafes packed with Parisians just a day after the attack. ©Lisa Anselmo

Last night, I found myself in the last place I’d have thought so soon after the attacks: a theatre watching the new James Bond film. A friend had wanted to go, but I worried I wouldn’t be able to handle the gun violence. “Come on,” she cajoled. “Let’s go see the good guys beat up the bad guys.” We thought the theatre would be empty, but found ourselves among a few hundred other Parisians needing the same release—wanting to spend a couple hours in a world where guns were safely tucked away in a fantasy world, where we could walk around inside the head of a fearless hero, someone who could make it all better, who could vindicate us.

Parisians escape to the movies. Nearly a packed house at the new James Bond film.

One week later to the minute, 9:20 p.m. Paris time to be exact, Parisians were out en masse in defiance of the fear mongers. “Make noise and light” was the call to arms on social media, with “#21h20” to mark the time. Despite the cold and rain, they came to Place de la Republique, gathered around the statue of Marianne, chanting, “Bleu! Blanc! Rouge!”—for the colors of the French flag. About one hundred formed a human chain, holding hands around the square. Some people gave away free hugs, others brought boom boxes and inspired everyone to dance. Still others, quietly lit candles for those who could not join this party, this celebration of life. Unlike a week ago, I was outside, in the middle of it all, and in spite of my fear and grief, was dancing in the city I loved.

People giving out free hugs, or calins, at Place de la Republique. Trust me, I hugged them all. Wouldn’t you? Photo: Patty Sadauskas, Paris on a Dime

Though not fully healed, I am not as broken as before. And though my dream vision of Paris is shattered, what remains is a more real picture of my deeper commitment to being here.

When a friend messaged me on Facebook, asking how I was holding up, I thought of James Bond, standing tough and still impeccably elegant after a tussle with the bad guys. Like Paris. “I’m shaken,” I smirked as I typed, “but not stirred.”

Scenes of a city finding a way though loss, hate and fear: 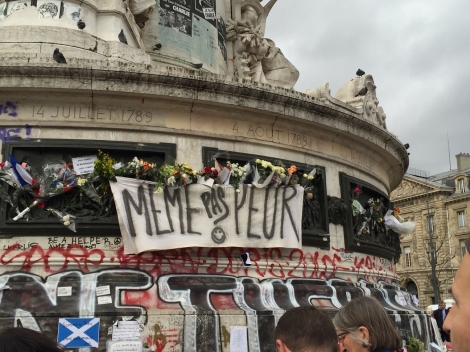 Kill one of us…kill 100 of us…kill 65 million—you can never kill the soul of France. Place de la Republique. ©Lisa Anselmo 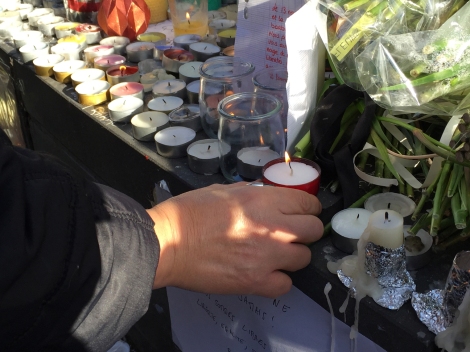 A woman places a candle at the memorial at Place de la Republique. ©Lisa Anselmo

That’s me, laughing and snapping photos of the dancing crowd. A week before, I never thought I’d feel like smiling or dancing again. Photo: Patty Sadauskas

22 responses to “Shaken, not Stirred”