“I’m so glad we’re friends.” These words were spoken to me by my Paris “sister,” Lisa Taylor Huff. They were followed by one of her long, hard hugs. I’d spent part of the day with her—helping her around the house, running small errands. She’d been feeling weak lately. No big deal, just some pain, she’d said. She’d be fine, ultimately, once the doctors got a handle on things.

She was gone a few weeks later.

Lisa had been diagnosed with kidney cancer in November of last year, and in spite of the fact it had spread, there was hope, the doctors promised. Lisa stayed active and optimistic—working on her memoir, blogging about her illness, posting doodads on Facebook, texting and emailing regularly. Right up until her last few days.

The collective expression on the faces of those who attended her memorial at Père Lachaise Cemetery: Bewilderment. This was not the way it was supposed to go. Not after all Lisa did to create the perfect life.

Lisa’s Paris story is described on her aptly named blog, The Bold Soul. She risked everything to follow her dream of living in Paris, and made it happen. She’s the reason I’m in Paris now. Like any big sister, after charting the course of expat life, she threw out a line and pulled me in—encouraging, advising, coaching me past my fears. She helped me search for my little apartment, and pushed me to apply for my long stay visa for France—which I got, thanks to her guidance. In early 2014, because of her “why not?” attitude, we co-founded No Love Locks, creating a firestorm that changed the conversation about historic preservation, and changed our lives in the process. And when I left my job and moved to Paris last summer—an experience that was fraught with fear and self-doubt—it was Lisa who administered the dose of faith and courage I needed. That’s just how she was. Always.

I met my name twin when I was sixteen, while doing the musical Grease at a local playhouse in New Jersey. Fate parted us then reunited us twenty years later. We would discover that, like our names, our lives had been identical—both of us writing, and both of us in love with Paris.

How we met. The baby-faced “Deux Lisas,” (her, center; me, right), backstage Pax Amicus Theatre of the Performing Arts where we did a production of the musical Grease. (My mother and I made those costumes.) Go Rydel High!

Lisa’s husband, who she met in Paris, called us “Les Deux Lisas”—The Two Lisas. We talked or emailed or texted nearly every day. Sometimes five times a day. She was the first person I’d call when I’d land in Paris, the first person I’d see. Lisa has been so much a part of my Paris experience I’m unable to separate the two. I don’t know how I feel about the City of Light without her shining in it.

Here I am at the crossroads of grief and loss, where this journey began after the death of my mother. Once again, I’ve lost a touchstone, a best friend. A guiding force. In some ways, the loss of a peer and soul sister makes me feel even more fragile. And even more like I’m on my own.

A friendship memorialized in film. Lisa and her husband were in my episode of House Hunters International. Image courtesy of HGTV.

Our friendship has now been reduced to data preserved in binary code. But from years of email exchanges, our entire story emerges. Two writers were never at a loss for words. We dreamed in tandem, often about the neighboring houses we’d buy in the French countryside with the profits from the film rights of our yet-to-be-written bestsellers. Lisa’s emails could be long, detailed accounts of her daily life, but just as often, random musings and inspiration blurted out, as if hearing her think. A favorite, one she wrote after she was diagnosed, still shows her hope and determination. The subject line: “Must Buy;” the text: “French farmhouse in Provence NOW. And then fill it with this stuff.” It included a link from our favorite French home decor site where we’d spend way too much time. I replied, “Love it! Let’s keep planning for our futures!” Looking back at that email, it’s clear I was paddling hard against the tide that I knew, deep down, was already turning. It wasn’t the first time I’d been here.

Our text messages trace the last three years, parsed out in chit chat and emoticons. In the first message, from August 25, 2012, I invite Lisa and her husband to brunch in my brand new apartment. The early texts are all like this: lunch plans, shopping trips, museum dates. Later, the message bubbles bear heftier content: the business of No Love Locks and, as our movement builds momentum, our frantic attempts to divvy up half a dozen daily press requests. Can you believe our lives sometimes? Lisa asks in one of them. It’s all there: the leak in my apartment; the day she tried to fix me up with that “nice guy from Georges’s office.” At some point, talk of blood tests and scans creeps in. Hospitals. As the string of bubbles comes to an end, two of my texts go unanswered. They’re followed by news of Lisa’s condition, which her husband sent with her phone from her hospital bedside. The last message, dated July 6, 2015, is of her passing. From first text to last, one long conversation of a too-short friendship.

Our story in text bubbles (l to r): Lisa was the first person I’d call or text when I’d arrive in Paris; No Love Locks press hysteria; Lisa’s encouragement, wisdom and advice are evident; Lisa’s text (lower right) when the city moved to save the Pont des Arts. Too ill to attend the press conference, she was still hopeful about a bright future. So was I.

As a writer, words have the ability to breathe life into characters and continue to tell their stories for generations. These words between Lisa and me are no different, and perhaps it’s fitting that the relationship between two writers should be reduced to words. The Letters of Les Deux Lisas, Volumes I, II & III. As long as they exist, so does the friendship, and Lisa’s words of encouragement can continue to inspire me. Maybe I’m not so alone in Paris.

I do miss the sound of her voice on the other end of the phone, our long-winded lunches. And I could really use one of her restorative hugs right now. But I will take the words she left behind, and be grateful to have had such a friend. 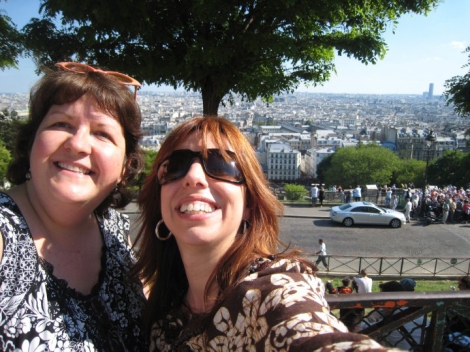 Be inspired by The Bold Soul
Here, highlights from Lisa’s blog. Read and share. Keep her message alive.
There’s How You Think It’s Going to Be. And Then There’s the Curve-ball Reality.
I Never Do Things the Easy Way. Never.
The First Day of the Rest of My Life
Why I Keep Falling Back in Love with France (or, 10 Years of The Bold Soul)
Or dig into the Bold Soul Archives. I highly recommend it. Nearly a million visitors can’t be wrong!

The official announcement to our supporters on NoLoveLocks.com