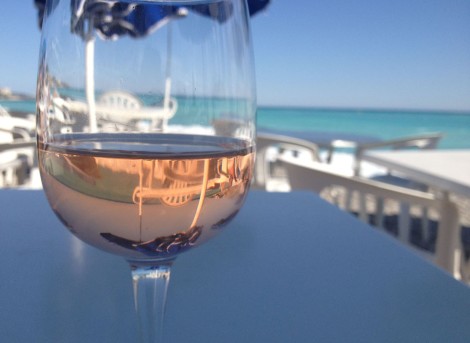 I’m sitting under a flawless sky on a rocky beach in Nice on the French Riviera looking out at a clear aqua sea. The waves are slapping hard against the stones sending a gentle, refreshing mist on those of us sitting at the oceanfront cafe sipping our rosés. This moment is completely carefree and peaceful—only the sound of the sea, the call of the seagulls, and the gentle chatter of fellow beachgoers at the nearby tables.

I didn’t want to come here.

This trip was planned with a friend who has an apartment in the south of France. At the time we booked our flights, I was excited; I’d never been to the region. My friend, who knows the area well, planned a full schedule of must-dos: social commitments in Nice; the Grand Prix in Monaco; the market in Ventimiglia, Italy. But two days before we were supposed to leave, while we were sitting in a café chatting about our plans, my friend received a call that her mother passed away suddenly. Of all people to be sitting next to her at a time like this, there was someone who was still mourning her own mother, someone who knew how hard this was hitting. Of course Nice would have to wait; there were more important things right now.

Later, at my friend’s apartment helping her tie up loose ends before she left for the U.S. in the morning, we also attempted to cancel our flights, but the penalty was steep. “You should go,” my friend said, when we realized we’d lose most of our money. “You should still go to Nice.”

Go to Nice? By myself?

The iconic Negresco Hotel. And to think I would have missed this. Photo: ©Lisa Anselmo

My mouth said, “I’ll think about it,” but my gut screamed No way! Having never been, not knowing the lay of the land? Nuh-uh. Nope. And alone for days on end? Not fun. In fact, four days alone in the south of France was the closest thing to hell imaginable.

But my friend wouldn’t take no for an answer. Even back in the States, she was making arrangements for me to meet up with her friends in Nice. “Go! You’ll have a great time!” she insisted.

These people don’t want to hang out with me; they don’t know me. Why would they care? No, going to Nice was a crazy idea. It wasn’t going to happen.

Still, a part of me—the part that has learned to ignore the fearful child inside—reached out to those strangers in Nice. And they reached back. Sure, they’d meet me. “Great!” they all said. “See you then!”

Before I could stop myself, I was on a plane. Now, here I am on the Riviera—for the first time in my life. And I almost didn’t come.

You who have been following me may think I’m some sort of bold thinker, a fearless adventurer. But I’m not. Not even close. I’m the one who has an anxiety attack when I have to go to the post office to mail a package. There, I’ve said it. And now you know. If I could live my whole life in my apartment, I would. That’s who I really am, the demon I fight every day. The fact that I bought an apartment in Paris, left a cushy job for a new life with an uncertain outcome, is nothing short of a miracle.

Fear is a powerful force in our lives. To overcome the fear paralyzing me, I worked with life coach Laura Berman Fortgang. Even so, fear still drives me—although, not in the way it once did. Yes, it’s still informing my actions, but instead of getting in my way, it pushes me onward. Like my new compass, when fear tugs on my gut, I know I’m walking in the right direction.

Incredible confection of façades throughout the city. Photo: ©Lisa Anselmo

There’s a greater version of oneself yet to be lived, so even when you feel the fear—panic to the point of nausea—you still must do that thing. I was afraid of Nice, of being alone here, but I got my ass on the plane. You make these things happen for you because there is something more important than fear: you.

Had fear taken over, all the beauty of Nice would have been missed, from the sea and the glorious candy-colored architecture, to a chance to meet new people in a new city. It has been unforgettable exploring the sights—and tastes—of Nice: shopping in Old Town (La Vieille Ville); photographing the boats in the port; strolling on the Promenade des Anglais along the beach, eating a real salade niçoise at Le Safari. And I even took a bus to Monaco, for lunch. Me. All on my own.

When you risk your security, when you jump into the gaping maw of the unknown with faith and promise, only good can come of it. Part of me knew that—even in the face of fear and insecurity—and that’s why I came to Nice against my will.

Here’s what would have been missed if Nice hadn’t happened: 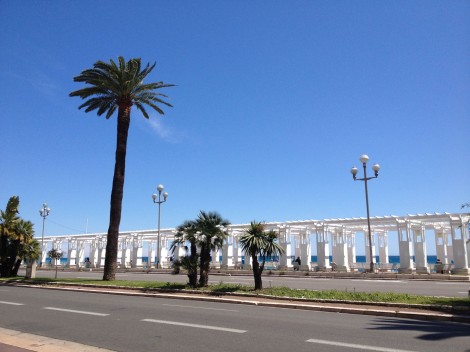 The quiet, narrow alleys that remind me of Italy. Photo: ©Lisa Anselmo 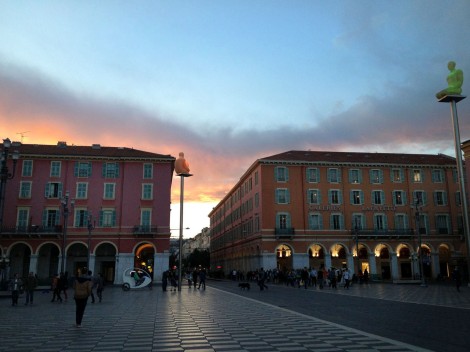 The balcony of the apartment where I’d have an apero. Photo: ©Lisa Anselmo

The view from the balcony. Photo: ©Lisa Anselmo

28 responses to “On a Beach in Nice—Against My Will”