August 25th marks the 70th anniversary of the liberation of Paris from Nazi occupation. There are official ceremonies and public celebrations here in the city to mark the occasion. It’s also a wonderful moment of Franco-American brotherhood, as American troops helped in the liberation.

Hôtel de Ville (City Hall) has a free exhibit where you can discover the deeper story of the courage and resilience of Parisians during the occupation—how they lived, and what they went through to achieve their liberation, in many cases with Parisian civilians sacrificing themselves for their way of life.

What you learn from the exhibition at Hôtel de Ville: The Americans didn’t just roll in with their tanks, sending the Nazis running with their hands and white flags in the air. The fight for liberation was slow and insidious; it was every day, all day. And it began the moment the Nazis hoisted that swastika on the Eiffel Tower. That’s how it has to be or you’re vanquished for real. 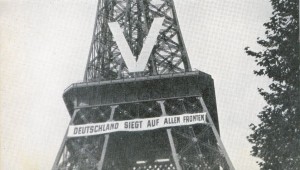 Eiffel Tower, 1940. The banner says, “Germany Victorious on All Fronts.” Meant to demoralize Parisians, it just fired them up. The French had cut the cables to the elevators so the Germans had to climb to hang these. rarehistoricalphotos.com

What Parisians went through, what they did for their city, is something most of us can’t begin to imagine, even with the photos staring you in the face—photos of well known locations around the city completely transformed into battle grounds, with barricades and exploding mortar shells. Visitors to the exhibit leaned in close and scrutinized these images of their city, trying to put themselves in the scene, but in the end, they were grateful for the black-and-white photos, and time, making it history. 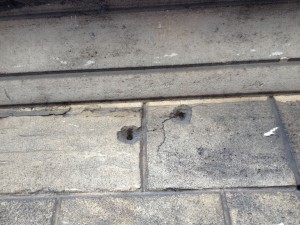 Bullet holes in the wall of Hôtel-Dieu. Permanent reminders of hard-fought freedom.

But outside the exhibit, Paris still bears the scars in technicolor: bullet holes in the Hôtel-Dieu and on a wall near the Concorde Métro; mortar shell wounds in the Conciergerie. And if you bother to look as you go about your Paris life, you’ll see plaques marking the spot where someone fell, often just an average citizen. Some plaques even have receptacles beside them where you could place flowers. If you wanted to.

Liberation. What does being free mean to you? If you’re sitting there bemoaning your life, feeling shackled by it, think about the liberation of Paris. There are people who’ve fought and died so you and I can have the luxury of a personal or philosophical struggle for freedom. You owe it to them to make the most of your life. Sacrificing your comfort zone to be free is nothing compared to those who’ve sacrificed everything. 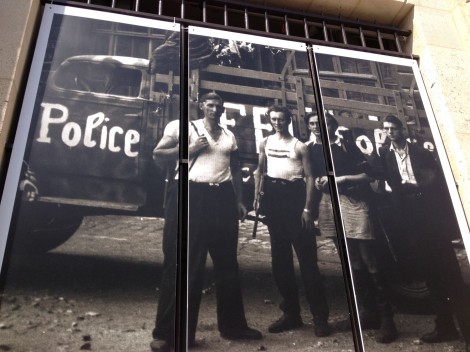 Huge photos from the era hang on the main police headquarters in Paris in honor of the 70th anniversary. When the Nazis decommissioned the French National Police during the occupation, the roque FFI, or French Forces of the Interior, was born. Valor, daring and courage. (Now, that’s sexy).