These things always happen just when I’m about to leave Paris. In August, it was a flood in my bathroom. This trip? Fire.

On the morning of my departure to New York, I was hosting a friend for breakfast chez moi, when an urgent pounding at the door nearly shook the coffee in our cups. Through the peephole I spied what looked like a trick-or-treater in a Darth Vader mask. When I opened the door, I found no fewer than eight firemen in full gear filling my tiny hallway. They looked more like SWAT than firemen, in tight-fitting uniforms with highly-polished, silver helmets—quite unlike the famed FDNY. Face masks covered all but their eyes, adding to the gravitas of the situation. The fireman who rattled my door—the lieutenant, it turned out— pulled down his mask to reveal a pretty, boyish face with full lips. This made my heart pound a bit harder.

Two trucks and about a dozen firemen came in search of a fire.

That is to say, between my state of panic and that pretty face, that’s what it sounded like he said. I replied with a blank stare as my brain flipped furiously through my mental French-English/English-French dictionary.

“Do you have a super in the building?” my friend translated for me. Nope, I did not. He translated a few more faw-faws. Did I have a key to my neighbors’ apartments? Uhm…no. So, let me understand this, I thought. There is a fire somewhere in the building but they can’t find it? And it might be behind one of these locked doors? That’s bad, right? Did I need to cancel my cab to the airport? Evacuate? What?

Eight firemen quickly became a dozen—a hulking squad of thumping feet and pounding fists. Where was the fire?

We could smell it, like burning paper, somewhere in the vicinity. For a pyrophobe like me, with recurring nightmares of things catching fire, this was my worst fear realized. My precious Parisian nest was going to burn down! My heart thunked in my chest; dread wormed through my system. Anxious to find the source of the smoky smell, my friend and I joined in the search, sniffing at cracks in doors, leading the firemen around, letting them into the caves with my key. Once I was on a mission, excitement replaced the fear and helplessness in my heart. It didn’t hurt that we were surrounded by sexy French men in fire gear. Seriously, maybe they were the source of the fire. Hot, hot, hot. 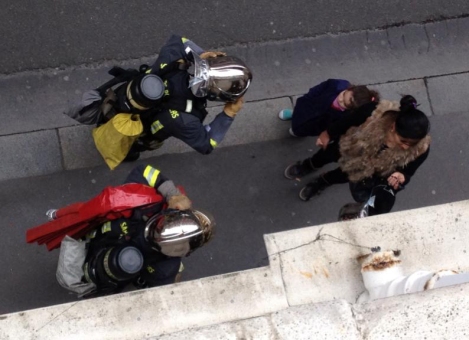 The smell of smoke dissipated as quickly as it started. The firemen found nothing, and the handsome lieutenant gave the “all clear.” Perhaps a neighbor had a small trash fire and snuffed it, then was afraid to own up to it. “Don’t worry,” the lieutenant said, smiling. “You’re safe.” Swoon.

As the men mounted their trucks, my friend and I perched on my balconette, straining for a last glimpse of the departing gladiators. “That was so thrilling!” I concluded, breathless. My friend agreed, and throwing his arms wide, cried out in a high voice, “Oh, mister fireman, put out my fire!” Then he pointed to his nether regions.